It is shown that superheavy elements may also be formed in the main r process responsible for the formation of the heaviest elements observed in nature. Under conditions of a high neutron density, the nucleosynthesis region lies close to the neutron drip line, so that the r process may circumvent the region where nuclei undergo spontaneous fissions and therefore have short lifetimes. However, a high induced-fission rate, which increases with the charge number, may prevent the nucleosynthesis wave from overcoming the region of isotopes heavier than curium, and the beta-decay chain leading to an increase in the charge number of product elements inevitably results in the spontaneous fission of the majority of product nuclei. Calculations of nucleosynthesis that were performed with available nuclear data within the scenario of a neutron-star merger reveal that only Z < 106 superheavy elements are formed. Their abundance at the end of the r process is commensurate with the abundance of uranium, but their lifetime does not exceed several years, so that they fast undergo decay. 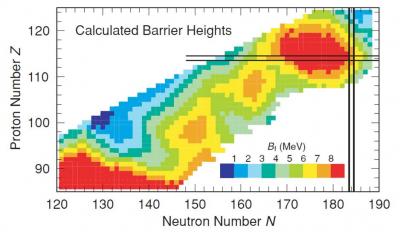